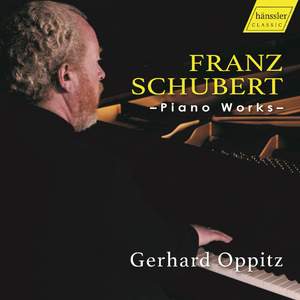 Schubert: Minuet in A minor, D277A

Diabelli: 50 Variations on a Waltz by Diabelli

50 Variations on a Waltz by Diabelli: Theme

13 Variations on a Theme by Anselm Hüttenbrenner in A Minor, D. 576: Thema

Gerhard Oppitz’ career opened up internationally in 1977 when he became the first German to win the coveted Artur Rubinstein Competition in Tel Aviv. This achievement and quasi political event led to concert tours across Europe, Japan and the USA. In 1978, he recorded the first of many albums, and the same year was offered a post as professor at the Munich Musikhochschule. Initially concerned that this activity would clash with his concert engagements, he finally, in 1981, accepted to teach a master-class, becoming the youngest professor in the history of the Musikhochschule. Oppitz performs over eighty recitals and concerts a year, playing with the world’s most prestigious orchestras. His discography stands at over 30 titles. On this release, he presents the entire piano works of Franz Schubert.