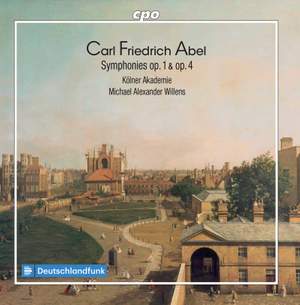 cpo's most highly successful edition featuring the symphonies of Carl Friedrich Abel (to date, three CDs) continues with further vibrant symphonies by him, this time in an interpretation by the Kölner Akademie under Michael Willens. Around the middle of the eighteenth century the terms ‘symphony’ and ‘overture’ were synonymous. The first orchestral works published by Abel as his opp. 1 and 4 were called symphonies in Continental publications and overtures in London editions. They without exception adhered to the scheme of the short opera overture in three movements with an animated first movement, a slow movement, and a finale of dance character. The symphonies forming Abel’s op. 1 were published in Amsterdam and London around 1760 and must have represented the first fruits of his activity in London. His op. 4 published in various European cities was even more popular. These compact works always begin with a first movement in sonata form and then continue with a highly appealing andante or andantino followed by a dance, which is often in triple time. This music is situated in the fascinating transitional phase between the Baroque world of George Frideric Handel and Johann Sebastian Bach and the classical style of Johann Christian Bach or Wolfgang Amadeus Mozart.