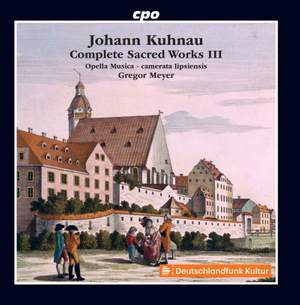 The third part of cpo's complete recording of Johann Kuhnau’s extant sacred works features the Magnificat. It forms his most extensive contribution to the field of church music and of all his works is the one inviting the most direct comparison with a central composition by Johann Sebastian Bach, his successor as St. Thomas music director. Like Bach, Kuhnau divides the Latin text into twelve contrasting sections consisting of choruses and arias. Both composers/music directors exploit almost all the instrumental resources available at the time, and both regarded a lavish Magnificat setting as an indispensable part of their respective repertoires; it may be said to have functioned as a musical credential certifying the excellence of their compositional oeuvre and their church music. The recording includes three other cantatas composed by Kuhnau for the days of Christmas. These works offer further outstanding examples of the musical splendour of which Kuhnau was capable of unfolding.