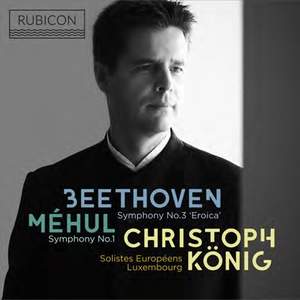 König and his Solistes Européens bring the Méhul persuasively to life. A similar approach – raw but with just enough subtlety – infuses their performance of the Eroica, which has a winning energy... — BBC Music Magazine, May 2018, 4 out of 5 stars More…

Méhul: Symphony No. 1 in G minor

‘For our first live recording on Rubicon Classics we have been thinking carefully which repertoire to choose from. When we observe music history and its repercussion on our times, it can be rather puzzling that our view of some of the most famous and influential composers seems to be rather monochromatic. We emphasise the influence of composers like Bach and Beethoven on their own and later generations of musicians, and tend to neglect the reciprocal influence all their contemporaries have had on them. In this sense it is striking to see the influence composers of the French Revolution - Grétry, Méhul, and Gossec and the Italian (but French based) Cherubini exerted on Ludwig van Beethoven.

More so, because they are generally forgotten whilst Beethoven - and Bach for that matter - remain pillars of classical music. For a long time it has been my wish to juxtapose in concert and recording works by Méhul and Beethoven. Especially the last movement of Méhul’s First Symphony in G minor is a puzzling reminder of how embedded Beethoven actually was in a much wider field of musical activity than nowadays perceived and what he, only a short time later, has achieved with very similar material, style, and attitude’. Christoph König.

König and his Solistes Européens bring the Méhul persuasively to life. A similar approach – raw but with just enough subtlety – infuses their performance of the Eroica, which has a winning energy and the odd rough edges.

Beethoven would have been surprised by the eclipse of Méhul’s music...Yet Méhul’s First Symphony (1808) wilts beside the Eroica and its irresistible sense of direction, especially in a performance as powerful and rich in detail as this.