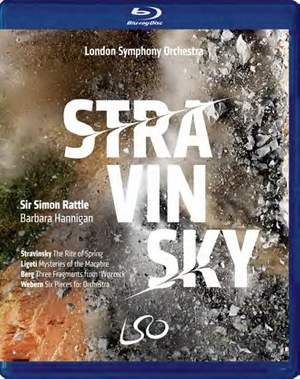 Every nuance [of The Rite] is crafted, each detail considered, yet there is still a sense of danger and visceral power…Rattle and the LSO are joined, usurped even, by the extraordinary Barbara... — BBC Music Magazine, February 2018, 5 out of 5 stars More…

Ligeti: Mysteries of the Macabre

Sir Simon Rattle is joined by virtuosic soprano Barbara Hannigan for a modernist programme that showcases the immense capabilities of the London Symphony Orchestra.

At the heart of this concert is The Rite of Spring. Once decried, it is now a cornerstone of orchestral repertoire and considered by many to be the greatest work of the 20th century. Its elemental nature is best summed up by Stravinsky, who, in an unaccustomed moment of humilty, said that he didn’t feel he was the composer of the piece, but simply the vessel through which it passsed. Sir Simon Rattle says: ‘I’ve been conduting it since I was 19...it’s one of those pieces that reminds you what the shock of the new is about and it’s still one of the great challenges and one of the great thrills to perform.’

To accompany Stravinsky’s magnum opus Rattle chose music from the Second Vienesse School. Webern’s Six Pieces for Orchestra was given a ‘richly expressive and pictoral’ performance, while Barbara Hannigan, appopriately dressed in a blood red gown, embodided the role of Marie in three fragments from Berg’s potent opera Wozzeck. As well as the Berg, Hannigan also debuted a now famous version of one of her party pieces, Ligeti’s kaleidoscopic Myseteries of the Macabre. Chanelling Gepopo, the crazed chief of police from Le Grand Macabre, in three arias, this display of coloratura pyrotechnics drew gasps as well as laughter from the enthralled audience.

Every nuance [of The Rite] is crafted, each detail considered, yet there is still a sense of danger and visceral power…Rattle and the LSO are joined, usurped even, by the extraordinary Barbara Hannigan for extracts from two contrasting operatic landmarks…Make no mistake, the laugh-out-loud high spirits are underpinned by virtuosic, serious music-making of the highest order.

Smoothly grooved it may be at times, but Rattle’s Rite is an imposing beast, lacking nothing for impact of sinuous grace…The pair of Second Viennese works are more aptly swathed in diaphanous textures: shot-silk strings and some lovely Viennese portamento from the LSO clarinets wrap around Barbara Hannigan’s Marie…[in Mysteries of the macabre] she nails every coo and squawk of Ligeti’s two-faced coloratura perfectly.