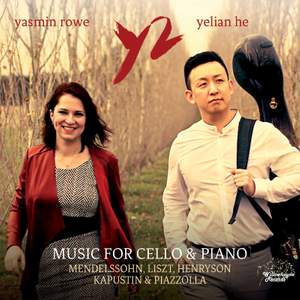 After her critically acclaimed début CD of piano music from Bach to Kapustin, Yasmin Rowe joins Australian cellist Yelian He (collectively known as Y2) in a programme of music by Mendelssohn, Liszt, Henryson, Kapustin and Piazzolla. Y2 has also achieved outstanding success on the world’s competition stages, notably 1st Prize in the 2009

Royal Over-Seas League String Competition in London and the Grand Prize and Audience Prize in the 2014 Australian Cello Awards Competition (now amalgamated as the Young Performers Awards) in Sydney. This release includes the world première recording of Svante Henrysson's "On A Day Like This" for solo cello.