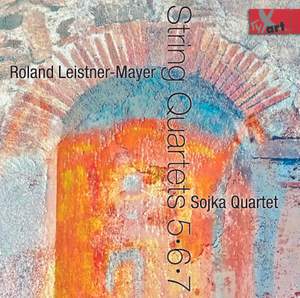 The string quartet is one of the central genres in the work of Roland Leistner-Mayer. This CD offers the recently composed string quartets No. 5 to 7 (2014‒16).

Roland Leistner-Mayer distanced himself early on from fashionable trends and avant-garde experimentation in favour of a forceful, expressive, and authentic diction. Form is for him the result rather than the means of expression. In his cyclical works ‒ the string quartets, for example – he returns to traditional types of movements and genres, which he re-forms and individualizes. From the time of the early string quartets (Nos. 2 and 3) on, he has occasionally moved towards a Bohemian idiom, similar to Leoš Janáček, audible in the rhapsodic themes, eruptive expansion of form, and a tendency to the "informal" which are the main features of his music.

"The melody resonates [...] in its complete totality; it is more than a sum of melodic parts. The end of the melody is already in me as I shape the beginning. Periodicity in the classical sense is effective as well. So it is possible for the unbiased hearer to comprehend the music immediately. My music does not demand prior intellectual knowledge. That was always important for me. Clearly harmonic sections are also fundamental – my music is perceived to be tonal throughout: in a free tonal functionality." (Roland Leistner-Mayer)

Leistner-Mayer strives for a comprehensible music, without clinging to well-established styles, pandering to nostalgic wishful thinking or paying homage to non-committal postmodernism.

"The great inner complexity of the artistic experience does not have to result in greater structural complexity. Quite the opposite: Roland Leistner-Mayer has searched unwaveringly for the simplest and most direct expression of the internal necessities. Through this, he has developed a personal style where vehement attacks and long spun out cantabile lines are always part of a logical implementation of the harmonic plan. Only the musical essence counts; there is no sound for sound’s sake." (Christoph Schlüren)