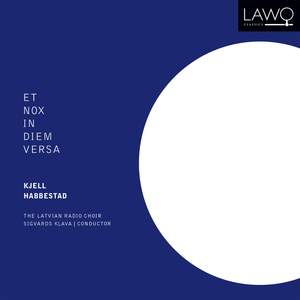 Habbestad: You who knelt in darkness quaking, from Op. 90

LAWO Classics presents here an entire album devoted to a selection of Kjell Habbestad’s sacred choral works. The music on this release was written over a period of 35 years and ranges from the composer’s opus 1 to opus 90. Textually, the works constitute a cycle of the church year, from the Annunciation to Christmas, and from Lent and Passion Week to Easter and Pentecost.

The Latvian Radio Choir, one of the world’s leading choirs, performs music from all periods, but has specialised mainly in contemporary music. There is hardly another choir that would be able to master the tonal challenges presented by certain works on this album. Thus the recording session in Riga turned out to be a very special experience both for the composer and the recording company.

Other contributors to the recording are Oslo Cathedral Choir, conductor Vivanne Sydnes, and Kåre Nordstoga at the organ. The reason for this is that the first three tracks, in the midst of a Latin and English language landscape, present Anglican chants with (New) Norwegian text. As one could not expect the Latvian Radio Choir to take on this task, the Latvian and the Norwegian choir pass the baton back and forth in the three works Magnificat, Nunc Dimittis and Benedictus Dominus.

Composer Kjell Habbestad studied church music and is Professor of Music Theory and Composition at the Norwegian Academy of Music. He has an earlier album of organ music, Gaudeamus, on the LAWO Classics label, and other releases are planned.