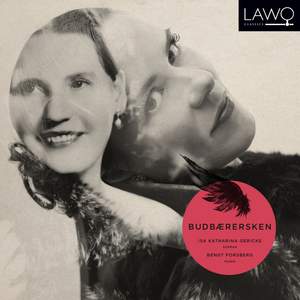 Kirsten Flagstad was born in Hamar, Norway, in 1895, into a life filled with music; both her parents were professional theatre musicians in Norway’s capital.

Throughout her childhood years at Vinderen in Oslo, music was a part of her life from morning until evening. Via her parents’ acquaintances, Kirsten was introduced to a broad repertoire; she would accompany herself at the piano in Schubert Lieder, revue songs by Vilhelm Dybwad, operettas by Franz Lehar and Emmerich Kálmán, as well as in the arias of Puccini and Wagner. Her début as an opera singer took place at the National Theatre in Oslo, in December 1913, where she sang the part of Nuri in Eugen d’Albert’s Tiefland, under the baton of Johan Halvorsen.

Despite that fact that Kirsten Flagstad is remembered as a singer mainly of large-scale works, with a voice that was suited to the largest venues, she had a particular love of Lieder and art songs. From her teens and throughout her career her repertoire included a significant number of German and Nordic songs. Her distinctive voice and ability made Kirsten Flagstad a source of inspiration to composers all over the world. Many wrote music for her, claiming that their music was so demanding that only Kirsten would be able to perform it. She had a predilection for Norwegian music and as often as not a recital programme would contain songs by Arne Dørumsgaard, Sverre Jordan, Øistein Sommerfeldt, Sigurd Lie, or Hjalmar Borgstrøm. Flagstad’s short, intense friendship with the Swedish composer Knut Håkanson inspired a special collection of songs that she kept in her repertoire all her life.