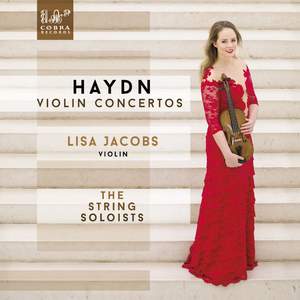 Almost every commencing violinist comes in contact with the violin concertos of Joseph Haydn. Which one has not practiced his cheerful G-major concerto? However, these wonderful gems of Haydn’s extensive oeuvre are nowadays rarely heard on the concert stage. After the death of Haydn, his violin concertos unfortunately became used more as study material for young violinists than concert pieces. Perhaps this is due to the lack of a certain grandeur, extraversion, and obvious virtuosity for the violin soloist, but these concertos are Haydn at his best; full of simplicity, elegance and an abundance of charm. The transpa- rency of these works actually makes them a great challenge for performers. Initially written for the Esterhazys and presumably for the solo violinist of the court ensemble at that time, Luigi To- masini, this CD will draw the listener back into the 18th century.

As was common for the time, Lisa Jacobs has written her own cadenzas for these concertos in which she brie y expresses her thoughts on the musical material and adds a shimmer of her own personality to every movement.

Dutch violin virtuoso Lisa Jacobs is known for her passionate performances, interesting programs and communicative quali- ties on stage. She is equally at home on the concert stage with concertos, chamber music and solo works and performed with amongst others the Royal Concertgebouw Orchestra, Brussels Philharmonic and Bremer Philharmoniker. The String Soloists is an international dynamic string ensemble based in Amsterdam, comprising 14 string players who perform under the leadership of its concertmaster Janneke van Prooijen and artistic leader Lisa Jacobs. Their approach to music-making without a conductor is what distinguishes the group from the regular chamber orchestras. It demands intensive involvement from all the musicians.