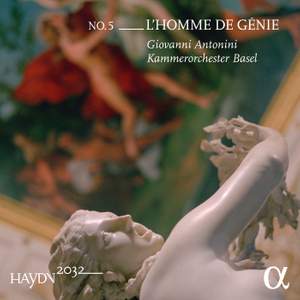 The Basel Chamber Orchestra present a sound that is a touch sweeter than Il Giardino Armonico’s, although that familiar period-instrument ‘spit’ is still never absent...That sweetness suits these... — Gramophone Magazine, January 2018 More…

Haydn2032, the ambitious project of recording the complete symphonies of Haydn, has been placed from the start under the artistic direction of Giovanni Antonini, with two ensembles, Il Giardino Armonico, which made the first four volumes, and the Kammerochester Basel, to which this fifth volume and the next two are assigned. Another characteristic of the edition is that each time Haydn is set in perspective with another composer; here it is Joseph Martin Kraus (1756-92): ‘Kraus was the first man of genius that I met. Why did he have to die? It is an irreparable loss for our art. The Symphony in C minor he wrote in Vienna specially for me is a work which will be considered a masterpiece in every century’, said Haydn in 1797. Though he long remained forgotten after his death, Kraus made an active contribution to the movement of poetic renewal called ‘Sturm und Drang’ or ‘Geniezeit’ (time of genius) because such artists as the young Goethe broke free of all tradition to follow their hearts alone. When Haydn called Kraus homme de génie, in French, he probably had this context in mind. The two composers had met in Vienna in 1783.

The Basel Chamber Orchestra present a sound that is a touch sweeter than Il Giardino Armonico’s, although that familiar period-instrument ‘spit’ is still never absent...That sweetness suits these later works, in which Haydn’s pithy motivic writing is allied to a melodic breadth...This is another winning entry into Antonini’s Haydn discography.

Scintillating period-style performances from the Basel players and Antonini.