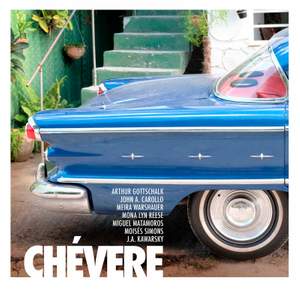 Carollo: In Your Hour of Need (arr. D.O. Guzmán)

Ansonica Records’ new release CHEVERE richly explores and demonstrates the myriad cultural intersections that have recently become available to American and Cuban musicians. The album came together at a recording session that took place in Havana, Cuba in the month of January in 2017. The release presents a variety of collaborations between American, or American-based, composers and Cuban instrumentalists, arrangers, singers, and composers. Some of these connections are relatively straightforward, while others are more nuanced and personal; yet, they all enrich the compositions on CHEVERE with the energy unique to the interaction of two powerful musical traditions. Arthur Gottschalk’s Imagenes de Cuba and John A. Carollo’s In Your Hour of Need represent the album’s most nuanced and personal connections to Cuba. Gottschalk’s work draws on his many trips to Cuba, referencing various elements of modern Cuban culture as observed in his travels. Carollo’s piece, on the other hand, gains its Cuban character directly from the input of CHEVERE’s producer in Havana, Dayron Ortega, who arranged this work for instrumental ensemble. Originally a piano etude, Carollo and Ortega collaboratively transform In Your Hour of Need into a brilliant and truly fascinating amalgam of Euro-American musical ideas and Cuban instrumentation and orchestration. Meira Warshauer’s plaintive choral works Oseh Shalom and Akhat Sha’alti represent the classic form of cultural exchange wherein Warshauer’s voice as a Jewish-American composer is brought to life by the renowned Cuban vocal ensemble Schola Coralina. The lyrical, mostly meditative choral works, drawn from Jewish liturgy and set in Hebrew, are rendered in a stunning performance, which is made more meaningful by the blend of cultures it represents. La Habana, Mi Amor! is a three movement piece which originated as three short works by composer Mona Lyn Reese. In collaboration with the musicians of Havana, her piece was arranged for Cuban jazz band and voice and serves as an excellent example of the artistic collaboration between America and Cuba amidst the lifting of various regulations in the American Cuban embargo. Jay Kawarsky’s Grace Dances, which is loosely inspired by an early Christian text, resembles Warshauer’s works in that its performance marks the cultural exchange between an American composer and Cuban instrumentalists. Grace Dances is scored for oboe and string quartet, and unfolds like a chamber concerto for the oboe. The work opens with a slow, expansive oboe melody, but is most notably characterized by playful, rhythmically active counterpoint. Kawarsky often manipulates the string quartet’s texture and sonic perspective, drawing solo instruments out of the group for brief duos, trios, and quartets with the oboe. Overall, Grace Dances is charming, lovely, and energetic, and even reminds one of Igor Stravinsky’s Jeu des cartes, as both works briefly quote Rossini’s overture to The Barber of Seville. HIGHLIGHTS Consider the depth and richness of the cultural exchange between American, Cuban, and European musical traditions represented on the album (i.e. in Warshauer’s pieces we hear Cuban vocalists singing an American composer's settings of Hebrew religious texts). There are a couple of very unique Cuban elements on the album, namely in Imagenes de Cuba and In Your Hour of Need, which, together, reference social, political, and musical concepts from Cuba’s modern and traditional culture.