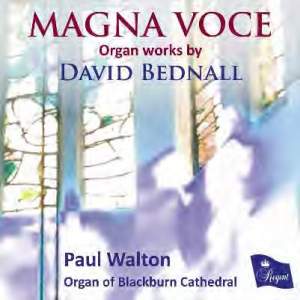 The fifth disc from Regent entirely devoted to the compositions of David Bednall, and the first recording of his solo organ works, played by Paul Walton on the organ of Blackburn Cathedral. The works on this recording span David Bednall’s compositional career to date. The Adagio was one of his earliest pieces, and Triptych in Honour of Herbert Howells is a major new work especially written for this recording. Two of the releases of his music on Regent have been Editor’s Choice in Gramophone, most recently Stabat Mater in the 2016 Awards issue. Recognized as one of the leading composers of his generation David Bednall studied for a PhD in composition with Professor John Pickard at the University of Bristol. He is Organist of The University of Bristol, Sub Organist at Bristol Cathedral and conducts The University Singers. He was Organ Scholar at The Queen’s College, Oxford, studied with Dr Naji Hakim and David Briggs and was Assistant Organist at Wells Cathedral. This new recording of Bednall’s solo organ music is played on the magnficent Walker organ of Blackburn Cathedral by the brilliant young organist, Paul Walton.

Bednall’s style is a highly successful fusion of the English school of Howells and Leighton with the mysticism and drama of French organists of the 20th century. The Blackburn Cathedral organ is the perfect vehicle for this mélange and, in the hands of Paul Walton and recording engineer Gary Cole, Bednall’s music really sings and dances. Walton revels in this music, from the boisterous and extrovert drama of several toccatas to some sublime meditations.