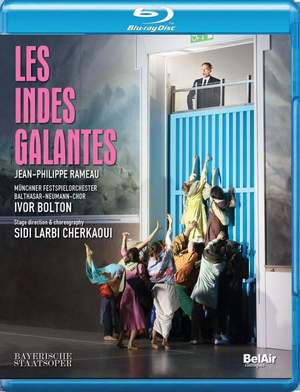 Stylishly played by the Munich Festival Orchestra under Ivor Bolton, the music of Rameau’s episodic exotic fantasy glows brightly in this performance…Dancers of the Eastman weave through the... — BBC Music Magazine, April 2018, 4 out of 5 stars More…

When the European youth chooses War above Love, Cupid decides to seek out new followers on other continents. The opera thus recounts the way people love, hate, envy or trust overseas, all the while asking its western audience a burning question: how do we love right? In Dreams of Babel, a documentary about the dance prodigy Sidi Larbi Cherkaoui released on DVD by Bel Air Classiques in 2010, the choreographer explained how shifting identities, multiculturalism, and his own plural heritage as the son of an immigrant, had shaped his dramaturgy and artistic inspiration. Thus, to take on the stage direction for Les Indes Galantes, whose multiple plots take place in a fantasized exotic « elsewhere » supposed to mirror the European society, meant for Cherkaoui bringing the tension between identity and alterity to a whole new level. And the choreographer pushes his reflection much farther than mere baroque specular aesthetics: his Indes Galantes raise the sensible issues of population movements, fragmented and ever-changing territories and borders, but also the refugee crisis that has shaken Europe to its very core… For this new production at the Prinzregenten Theater, Sidi Larbi Cherkaoui brought his own dance ensemble, the Eastman company, as well as a brilliant vocal cast, among which Anna Prohaska, François Lis or Lisette Oropesa. Ivor Bolton conducts a Münchner Festspielorchester at the top of its game.

Stylishly played by the Munich Festival Orchestra under Ivor Bolton, the music of Rameau’s episodic exotic fantasy glows brightly in this performance…Dancers of the Eastman weave through the singers in a kinetic fusion of Baroque and street dance…The movement and singing of the four female principals, especially Anna Prohaska (doubling as Phani and Fatime) is outstanding, as is the performance of the Balthasar-Neumann-Chor.

Auvity is ardent and glowing right to the top of his extraordinary range, first as Valère and then as Tacmas. If his voice is silver-bright, then John Moore’s Adario is all warm gold; what an impressive performance this is from the young American baritone…This isn’t a show that lends itself naturally to a DVD but as a point of reference and a marker for future concept-treatments of French Baroque it’s invaluable.

[Bolton] also draws out some enticing colours from the Münchner Festspielorchester, such as the silken quality of the strings, notably in the Prologue; the bright and airy prelude to the third Entrée; and the grandeur of the Chaconne at the climax of the final Entrée, underlined by lustrous trumpets.

Most of the singers take two roles, and they are all stylistically, textually and theatrically adept. Especially memorable are two artists who partner each other marvellously in Part 4 -the soprano Lisette Oropese and the baritone John Moore. Perfectly integrated into the production are dancers from Eastman, Cherkaoui's own dance company, seen in his astoundingly musical choreography. The orchestral playing and choral singing are stellar, and Ivor Bolton instils a dramatic flair that ensures a completely involving experience for the viewer.