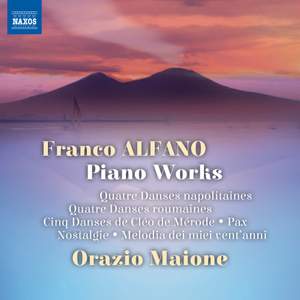 In addition to his operatic achievements, Franco Alfano composed an impressive body of chamber and instrumental works, including the little-known music for piano heard on this recording. His early career as a virtuoso pianist is reflected in works ranging from the Quatre Pieces, with their tributes to Schumann and Mendelssohn, to the Danses napolitaines, inspired by the Neapolitan canzone, the neo-classicism of the Cinq Danses de Cleo de Merode and the quirky rhythms of the Danses roumaines. Recordings of Alfano’s chamber music can be heard on Naxos’ earlier releases. His opera Cyrano de Bergerac, with Placido Domingo in the title role, is available on Naxos DVD and Blu-Ray.