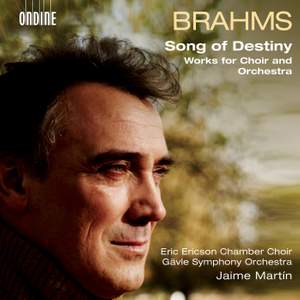 Works for Choir and Orchestra

A clean and deft approach to Brahms. Darkly-hued choral pieces concerning fate and destiny are balanced by the delicious Liebeslieder Waltzes. — BBC Music Magazine, Christmas 2017, 4 out of 5 stars More…

18 Liebeslieder Waltzes, Op. 52 (Version for Choir & Orchestra): No. 9, Am Donaustrande

The series of Brahms recordings on Ondine with the Gavle Symphony Orchestra and their chief conductor Jaime Martín culminate with this recording of works for choir and orchestra together with the prestigious Eric Ericson Chamber Choir. Jaime Martín became the Artistic Director and Principal Conductor of Gavle Symphony Orchestra in 2013. During recent years orchestral engagements have led the rising conductor to collaborate with several prominent orchestras around the world. Brahms’ impressive Schicksalslied was written in 1868. The work delves musically into the duality between the “fate-free,” ideal heavenly life and the existence of “suffering man” on earth articulated in Friedrich Hölderlin’s poem. During the summer of 1881 Brahms composed his Nanie on a poem by Friedrich von Schiller as a song of lament and mourning for the fleetingness of beauty. Eric Ericson’s Chamber Choir was founded in 1945 by then 27-year-old Eric Ericson, and has since taken a central position in the Swedish and international music scene. On the world stage, Eric Ericson’s Chamber Choir is among the very foremost professional ensembles, and through the years it has been awarded many distinctions.

A clean and deft approach to Brahms. Darkly-hued choral pieces concerning fate and destiny are balanced by the delicious Liebeslieder Waltzes.

Jaime Martin leads eloquent, dynamic and dramatically contrasted accounts, the Eric Ericson Choir confirming its famed reputation and the Gӓvle SO just as impressive; there’s a real connection between conductor and performers.