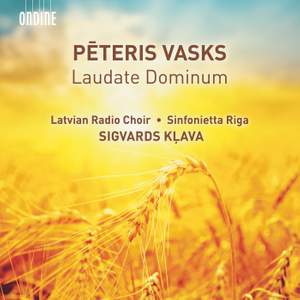 At times impassioned, at times hauntingly still, Vasks’s atmospheric choral world is brilliantly showcased in performances that are as exquisitely balanced as they are perfectly paced. A stunning... — BBC Music Magazine, March 2018, 5 out of 5 stars More…

Vasks: The Fruits Of Silence

This release includes new works written by Peteris Vasks (b. 1946), internationally the most well-known composer from Latvia, performed by his compatriots, the Latvian Radio Choir and Sinfonietta Riga under the direction of Sigvards Klava. During the years both the choir and the orchestra have collaborated extensively with the composer and premiered several works by him, including Da pacem, Domine which was premiered as a part of Peteris Vasks' 70th anniversary concert in 2016. This album is the third album dedicated to works by Vasks by the Latvian Radio Choir and Sigvards Klava on Ondine. Three works included on this album were written in 2016: Da pacem, Domine is according to the composer, a powerful “cry of desperation for our times, a prayer for our mad world. I believe that music strengthens our faith, love and soul.” Mein Herr und mein Gott is a work inspired by a solemn meditation written by a 15th century Swiss mystic Nicholas of Flüe, also known as Brother Klaus. The lyrics of Laudate Dominum, the title piece of the album, consist of only one sentence which is repeated by the choir. The choral texture of the work alternates with majestic organ episodes. The remaining two works in the album are based on texts by Mother Teresa.

At times impassioned, at times hauntingly still, Vasks’s atmospheric choral world is brilliantly showcased in performances that are as exquisitely balanced as they are perfectly paced. A stunning disc.

The choir’s commitment to this music is exemplary, their tone even and perfectly balanced across all voices. Klava has long known how to extract the best from this polished group of professionals, and their latest disc only enhances his and the Latvian Radio Choir’s already considerable reputation.

Ilze Reine plays the organ of St John’s Church in Riga as if with fire in her eyes, and the Latvian Radio Choir’s trademark combination of purity and luminosity with a sprinkling of Russian friction sets [the Laudate Dominum] off. At first you might presume Vasks is growing more calm and reflective in these recent works. But the opposite might well be the case.