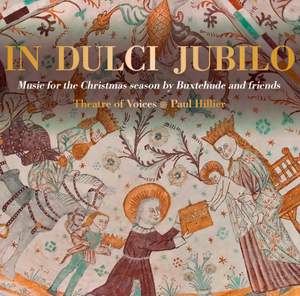 Music for the Christmas season by Buxtehude and Friends

Taking Bach’s predecessor Buxtehude as its focal point, Hillier’s programme steers a chronological passage through the events of Christ’s nativity, illustrating them with music by Buxtehude himself,... — BBC Music Magazine, Christmas 2017, 5 out of 5 stars More…

In the gloomy sky of a winter’s night a bright star emerges and ignites Advent’s anticipation of the Nativity –the year moves towards the rebirth of light just at the time of greatest darkness. With evocative works by the Baroque master Dietrich Buxtehude and the circle of 17th-century northern German composers around him, Paul Hillier conducts his Grammy award-winning ensemble Theatre of Voices in a stimulating addition to the traditional Christmas repertoire. Theatre of Voices, widely recognized as one of the world’s foremost vocal groups, was founded by Paul Hillier in 1990 and re-established in Denmark when he moved to that country in 2004. The group presents a wide range of contemporary music, often juxtaposed with elements of early music. Their programs feature many of today’s most eminent composers - Berio, Pärt, Reich, Cage, Gudmundsen-Holmgreen, Stockhausen - while among their current favourite ‘early’ composers are Perotin, Dowland, and Buxtehude.

Taking Bach’s predecessor Buxtehude as its focal point, Hillier’s programme steers a chronological passage through the events of Christ’s nativity, illustrating them with music by Buxtehude himself, and by those in his orbit…The eight Theatre of Voices singers deliver unfailingly sensitive performances under Hillier’s deft direction, and the recorded sound is excellent.

All skilfully woven together by the informative booklet notes.

There is an incredible variety here…The last motet, Ab Oriente venerunt Magi by Jan Pieterszoon Sweelinck…is Theatre of Voices at their level best: tender, blended and deliciously phrased. If you are looking for the Christmas disc of 2017, here it is.

this is as classy as Christmas albums come: music from an important Swedish archive of northern European baroque music (the Düben collection at Uppsala University), delivered with razor-sharp clarity by Paul Hillier’s Theatre of Voices and on luminous period instruments...its pristine sound will make an airy, lissom antidote to general excesses of the season.