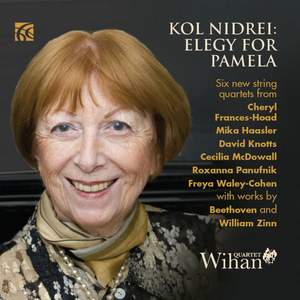 Haasler: A Fugue for Pamela

McDowall, C: To a Nightingale

Knotts: At the Mid Hour of Night

When I decided to mount a memorial concert for Pamela it was clear to me that chamber music had to be the basis upon which to plan the event. Chamber music pervaded her life for many years and it was appropriate to use it as the vehicle for projecting her love and dreams. The other decision I reached very quickly was that the best ensemble to perform the whole programme was the Wihan Quartet from Prague. Pamela looked after them with great affection ever since they won the First Prize as well as the Audience Prize of the London International String Quartet Competition in 1991. The Wihan Quartet always referred to her as ‘our English mother’.

In every generation one encounters a few (very few) individuals, who thro ugh their dedication, steadfastness and creative determination have left an indelible mark on the community at large. The late Pamela Majaro was one of those individuals. She adored chamber music and its vast repertoire from an early age. She harboured a nostalgia for the days when chamber music in the more enlightened western world was performed in homes in front of invited friends. She was determine d to remove the notion that chamber music was an elitist genre of music. Any group o f players, including enthusiastic amateurs, she felt, could form an ensemble and play for their own pleasure and their friends. That was what she viewed as the essence of chamber music. The main obstacle to this dream was the sad fact that the younger generation showed no interest or knowledge of this wonderful form of music. It was sufficient to attend chamber music concerts in public venues to note the absence of young faces. So she decided that the first challenge was to change the age profile of the audiences by attracting children and young people to chamber music concerts.Together with her husband Simon she set up charity in 1988, CAVATINA Chamber Music Trust, with the aim of attracting the younger Generation to chamber music. P amela was the driving force of the whole project. In a single-minded fashion and with total commitment, she developed a multifaceted series of activities designed to attract the youth of this country to the idea that chamber music is fun. Both Pamela and her husband Simon were awarded MBE’s in 201 0 for establishing CAVATINA and all its education work. Pamela represents a wonderful role model for others who aspire to enhance the music education systems of this nation.