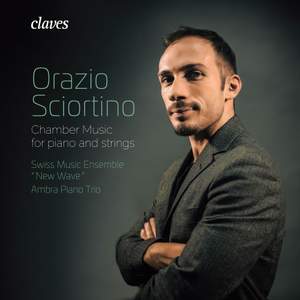 The works presented in this recording were composed between 2012 and 2013, and propose a combination of piano and strings, from cello duo to trio, quartet and quintet. Although not thought out as a cycle, these works were created simultaneously, at a time when I needed to reinforce my language while maintaining a rigorous but distant approach of a sort of aesthetic apriori declaration, musical conditioning or model, in an attempt to seek a voice, a stylistic identity of my own. The presence of the piano enabled me to override a kind of timidity that I had felt up until then towards pianistic writing. Commissioned by ensembles of excellent musicians, who then became great friends, those pieces were for me a kind of ideal research ground, free from constraint or particular demands from the commissioner. Added to that, I had at my disposal interpreters of the highest level, of whom I could ask anything, with as much time as necessary to develop ideas, to alter them or even possibly discard them. It is no coincidence in fact that, with the exception of the cello and piano pieces, these pieces have a generic title that simply refers to an ensemble of instruments. Research was therefore concentrated on sound, on the style of writing that interested me, not necessarily new but that could broaden my vocabulary of sound. It was also a work of several years, which consolidated the way I envisaged my activity as musician, the relationship between musician and audience, the principle that conversing with the story does not mean being back-ward looking, and that refuting tradition does not mean being innovative.

The common feature of the works gathered in this CD is, as I said, the central position of the piano, which, especially in the Klavierquartet and Klavierquintet, has an almost concertante role, at the centre of a dialogue between timbre effects, resonance, but also certain moments of virtuosity that place the pianist in a role of soloist as opposed to a “tutti”. The Klavierquartet for violin, viola, cello and piano, dating from 2011 but revised the following year, is definitely the most complex of the cycle, both by its duration and the investment required of the musicians. It is a composition articulated in several sections, each being a kind of reinterpretation of the same musical material: a contiguous chord grid makes up the foundation onto which the complete work is built. These chords are repeated, superimposed, decomposed, create an extremely dense contrapuntal fabric from which certain melodic fragments emerge, which the ear can pick out throughout the piece.

The Klavierquintett for violin, viola, cello and double bass, on the other hand, composed between 2012 and 2013, was written with Schubert’s famous Das Forellen-Quintett in mind. In this case however, the Schubert reference is solely limited to the somewhat unusual instrumentation with the use of the double bass.

Similarly in the Klavierquintet, an essential single initial material is reinterpreted in each of the different sections, opposing, on the one hand, an almost madrigal-like language, expressively frozen, static, with, on the other hand, another, clearly more violent and agitated. In the second part of the work, both sections combine with each other, one making way for the other in a continuous cross-fading game, from which the nebulous finale appears before vanishing mysteriously.

The Klaviertrio for violin, cello and piano (2012) was written in jest. Born from the idea of writing a small piece as a gift to musician friends during a dinner party, it became, in its final version, a much more complex piece than initially intended. It is a most lyrical piece, in which the musicians are invited to make their instruments sing, using their complete expressive range. The sound refractions of a counterpoint made of timbres and melodic fragments are barely suggested; a muffled melody struggles to emerge, explodes into particles of sound, then to return to a kind of suspended state, never to be expressed.

Diario di un poeta is a cycle of five pieces for cello and piano, written in 2013, but using previous material. The title of the album refers to a cycle of Lieder for voice and piano on texts by Ungaretti, written in 2004, from the collection of poems Giorno per giorno. Each of these pieces is associated to a different text that could be recitated during the performance. I consider Ungaretti’s poem Giorno per giorno to be a kind of journal, a moment of confession where the poet recalls the grief of the death of his son Antonietto: in his mind still resounds the sound of his sick, but confident child’s voice, vainly asking for help. The extremely complex instrumental writing, particularly for the cello, tends to enhance the emotional atmosphere of the verses. These pieces are to be considered as true Lieder without words, in which the text emerges from a tense musical weft.