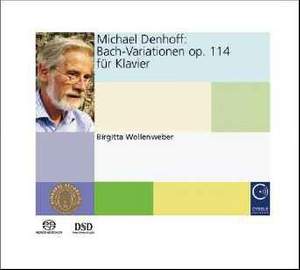 I believe that great music always has a spiritual context, according to Michael Denhoff. His statement is not a direct reference to Johann Sebastian Bach (1685–1750), though of course he places Bach in the highest echelon. Bach’s music is indisputably “great“, and he himself always confirmed that he composed in order to praise God. In the process he wrote a number of works that rise so far above the repertoire and formal canon of their time that they are rightly regarded as “timeless“ – “timeless“ not in terms of formal and technical details, but rather in their overall appearance. Examples include the Goldberg Variations (BWV 988), the Art of Fugue (BWV 1080) and the Six Suites for Violoncello Solo (BWV 1007–1012).

Michael Denhoff: When I heard the final recording of the Goldberg Variations by Glenn Gould, a wish grew inside me to create something comparably amazing and comprehensive ... someday ... but at the time, in 1981, I was 26 and not yet mature enough for such an ambitious undertaking. Only now, and quite hesitantly – and wracked with self- doubt – have I felt qualified for the task, but with 28 variations I intended to remain “modest“ behind Bach. Even so, it grew to contain 30 variations, since the theme adds a bass line and thus itself becomes a variation; the concluding repeat of the Sarabande, similar to Bach’s Aria in the Goldberg Variations, is a further variation; indeed, Bach’s exact sequence of notes appears, but here with octave leaps.

The pianist Birgitta Wollenweber has worked intensively with Michael Denhoff since 1996 – also as his duo partner. Whether giving solo recitals, collaborating as a chamber-music partner or appearing as a soloist with orchestra, she is active at home and abroad. She is a regular guest at inter national festivals and records for radio and TV. Her repertoire encompasses works from all periods, and her discography, 16 CDs to date, includes solo and chamber music by rediscovered composers. She studied in Detmold as well as with Peter Wallfisch at the Royal College of Music in London. She has received numerous awards and is a professor of piano and chair of the piano department at the Hochschule für Musik Hanns Eisler in Berlin. She teaches in Germany and elsewhere, gives courses and directs the concert series Klassik Um Eins (Classics at One) in Berlin and Klassik Um Sechs (Classics at Six) in Brandenburg.