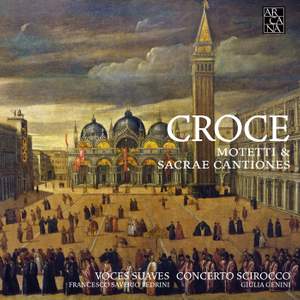 Venice, July 1603: Giovanni Croce, known as ‘il Chiozzotto’, a priest at the church of Santa Maria Formosa, was appointed maestro di cappella of St Mark’s basilica, one of the most prestigious posts in the musical world of the time.

A controversial biography, many aspects of which have not yet been elucidated, and a musical output of excellent quality constitute the appeal of this composer born in Chioggia, who is still overshadowed today by his famous successors. Yet Giovanni Croce proves to be an extraordinary figure, halfway between the conservative Venetian school of Gioseffo Zarlino and the modernism of Claudio Monteverdi. He makes masterly use of double chorus and of such special devices as echo effects, while maintaining a fine transparency in his counterpoint that links him with classical polyphony.

Two exceptional young Swiss ensembles, the vocal group Voces Suaves (which has won several prizes for its first two recordings) and the instrumental ensemble Concerto Scirocco, combine here in the magnificent surroundings of the palatine basilica of Santa Barbara in Mantua, where they have the advantage of the outstanding Antegnati organ built in 1565, to honour Giovanni Croce and his contemporaries and introduce us to other aspects of the glorious musical activity at St Mark’s.