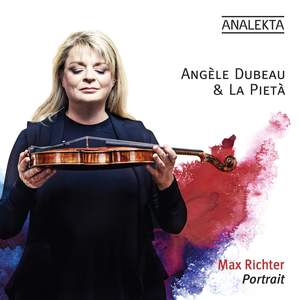 Richter, Max: The Journey, not the Destination (From “Black Mirror – Nosedive”)

Richter, Max: Autumn Music 2 (From “Songs From Before”)

Richter, Max: She Remembers (From “The Leftovers” – Season 1)

Richter, Max: On the Nature of Daylight – Written on the Sky (From “The Blue Notebooks” and “Disconnect”)

Richter, Max: The Consolations of Philosophy (From “Black Mirror – Nosedive”)

Richter, Max: Departure (Lullaby) – The Quality of Mercy (From “The Leftovers” – Season 1 and 2)

Analekta is very proud to announce the release of Portrait: Max Richter by Angèle Dubeau & La Pietà. “I devote my new Portrait album to Max Richter and his impressive body of powerful and original works. I have selected sixteen works with his unique signature, which I revisit here with my violin and my orchestra, La Pietà.” - Angèle Dubeau O.C., C.Q., DFA Max Richter is one of the most influential composers of his generation.

Inspired by Bach, punk rock and ambient electronic music, he has composed works for more than 50 films, including Waltz for Bashir, Shutter Island by Martin Scorcese and Arrival by Denis Villeneuve, as well as HBO's The Leftovers television series.