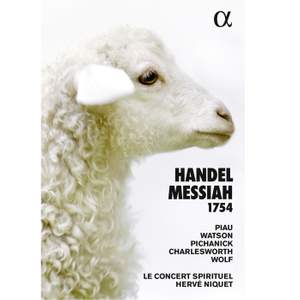 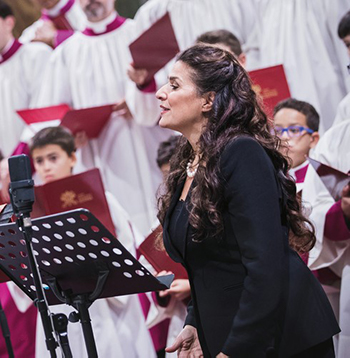 Katherine enjoys a contemplative programme of Advent and Christmas motets from the Vatican choir (plus a very special guest!) and an incisive Messiah with a difference from Hervé Niquet.

Why yet another Messiah? ‘I went through the different scores that exist and decided on the very interesting 1754 version, which features five soloists. You must remember that, when Handel arrived somewhere to perform his oratorio, he had soloists of varying standards available to him. So he quickly revised his score accordingly... All this is directly related to the reality of Handel’s situation as a concert promoter. In those days, to earn a living from his music, a composer absolutely had to get his works performed and make a profit on the evening. The idea of not retouching a work to avoid “spoiling” or “distorting” it is a much more modern one. There must be around a dozen versions of Messiah (I won’t list them all). The 1754 version is rarely played because it calls for five soloists: two sopranos, alto, tenor and bass... I’ve opted here for an operatic interpretation, taking its cue from the drama inherent in this account of the life of Christ.’ (Herve Niquet) This deluxe edition also includes a fascinating portrait of Herve Niquet, an interview organised around thirty keywords (from ‘Dance’ to ‘Nerves’) that sheds new light on one of the most atypical conductors on today’s musical scene.

The two top voices here – Sandrine Piau and Katherine Watson – are well matched, with Anthea Pichanick the even, steady contralto and Rupert Charlesworth the clean, fresh-toned tenor…While Niquet’s orchestra is rather rough-textured, his choir is certainly lithe and athletic; but some of the text gets lost in the over-resonant church acoustic.

Light-footed tempi and beautifully sprung rhythms are a given at this level of music-making; all five soloists are excellent, with stylish ornamentation, and the choral singing is often breathtaking in the clarity of its virtuosity. But what definitely sets this recording apart from what is surely an overcrowded market is Niquet’s dramatic flair, an approach that drives the piece along as if it were an opera. The whole is immensely satisfying and enjoyable, and offers a refreshing take on the most popular oratorio in the repertoire.

The quicksilver music-making causes much of the oratorio to skip by briskly without having sufficient rhetorical space and textural depth to guarantee a profound emotional impact – although there are plenty of things to enjoy along the way…Niquet’s high-wire interpretation is commendably inquisitive and often surprisingly intimate.

Niquet makes good on his assertion that he has ‘taken [his] cue from the drama inherent in this account of the life of Christ’ from the off, with a springy, taut Overture that fairly bristles with anticipation, and the energy and impetus never slacken from thereon...tenor Rupert Charlesworth stands out for the sincerity and elegance with which he shapes ‘Comfort Ye…Ev’ry Valley’.

I’ve been seriously impressed...this is now my favourite recent Messiah.