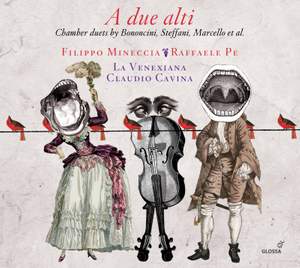 A glorious treat of a disc, with the mellifluous, intertwining voices of countertenors Filippo Mineccia and Raffaele Pé transporting us to magical realms. Baroque duets at their finest. — BBC Music Magazine, January 2018, 4 out of 5 stars More…

Filippo Mineccia and Raffaele Pe – two of the most compelling international countertenor voices currently around – unite to deliver a recital of Baroque vocal duets, in A due alti, a programme for Glossa which demonstrates that there was much music of quality being composed in this genre beyond that by Handel. Testament to that is the increasing interest on record in recent years of vocal music by the other composers represented on this recording – Steffani, Bononcini, Caresana and Marcello.

Such was the brisk demand in aristocratic circles for these intimate duets from the 1680s onwards (even princesses commissioned them!), especially up through Italy and across the German lands, that active opera composers such as the London rivals, Handel and Bononcini, were as attracted to them as were fervent detractors of opera such as Marcello. In them the Mediterranean sensuality of the vocal line was reconciled with the Northern European taste for counterpoint. With the voices of Pe and Mineccia blending attractively together or taking on distinct characters as demanded by the music, Claudio Cavina brings all his innate musical understanding and experience in shaping this beguiling music and bringing out its delicate subtleties from the cello, harp, theorbo and harpsichord which make up La Venexiana on this occasion. Stefano Russomanno delves into the history of the vocal duet and provides a fascinating commentary to the mellifluous music-making of the two countertenors.

A glorious treat of a disc, with the mellifluous, intertwining voices of countertenors Filippo Mineccia and Raffaele Pé transporting us to magical realms. Baroque duets at their finest.

This disc opens with Benedetto Marcello’s joyful Felice chi vi mira…in which both countertenors bounce between happiness and sighing with evident delight. Their voices are brilliantly agile and suitably extrovert for this sort of cantata, and both singers excel in marrying the delicious onomatopoeic sighing qualities of the Italian text to Marcello’s melodic shapes.

Filippo Mineccia and Raffaele Pe unite here to give us a masterclass in this mellifluous repertoire, their diamond-bright voices flashing with colour and character. Claudio Cavina directs with an expert ear for this beguiling music’s narrative drive.