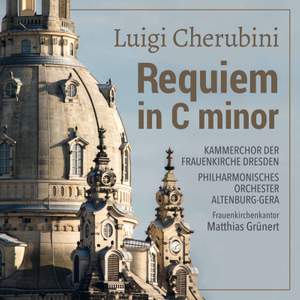 Beethoven praised him as "one of the greatest dramatic composers”: Luigi Cherubini is one the musical stars of the 18th and 19th centuries whose timbre-rich Requiem in C minor was particularly esteemed by his contemporaries. Cherubini in turn was an admirer of Joseph Haydn’s music. He was deeply shocked when he learned of Haydn’s death and worked through his grief in his touching Chant sur la Mort de Joseph Haydn. But like today, rumors and facts back in 1805 were hard to distinguish from each other: one can only imagine how Cherubini must have reacted when he found out that Haydn was still feeling quite well at this time. With his powerful funeral music, Cherubini wrote music history, and yet many of these wonderful works are only now being edited. With the support of the International Cherubini Society, the Dresden Frauenkirche Chamber Choir and the Philharmonic Orchestra Altenburg-Gera under the direction of Matthias Grünert, cantor of the Frauenkirche, have selected the most moving works of Luigi Cherubini’s rich creative output in order to create a portrait one of the greatest dramatic composers.