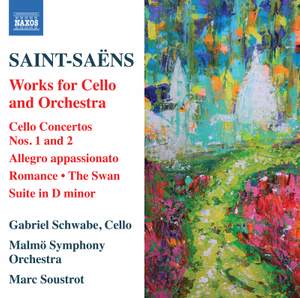 These performances and the recording quality are up there with the very best and, in some instances, surpass their rivals...Schwabe plays with a light heart and produces a light, airy tone to... — Gramophone Magazine, January 2018 More…

Saint-Saëns: Allegro appassionato in B Minor, Op. 43 (version for cello and orchestra)

Composed during a period of social readjustment in post-war France, the First Cello Concerto marked Saint-Saëns acceptance as a composer among the establishment, and has long been one of his most admired works. Recognition for the fiendishly technical Second Cello Concerto took longer, although its tranquil central movement contains one of the most sublime melodies Saint-Saëns ever wrote. The supremely famous Le Cygne appears alongside the less well-known Bach-inspired Suite in D minor, and with the inclusion of the Romance this programme contains Saint-Saënss complete works for cello and orchestra. Cellist Gabriel Schwabe has appeared on the Naxos label with Brahmss two Cello Sonatas (8.573489): He counts among the best cellists of his generation (Concerti), Schwabe carefully molds every single note. I wish the tones could stay a bit longer just to be able to marvel at them better (Fono Forum)

These performances and the recording quality are up there with the very best and, in some instances, surpass their rivals...Schwabe plays with a light heart and produces a light, airy tone to match, combined with a nonchalance and poise that I found most attractive.

Throughout the disc, ensemble between soloist and orchestra is immaculate, with a wonderfully fluid approach to rubato. There is style aplenty also in the First Concerto, and Schwabe’s interpretation is refreshingly free of mannerism, with the figuration on the cello beautifully shaped and precise.