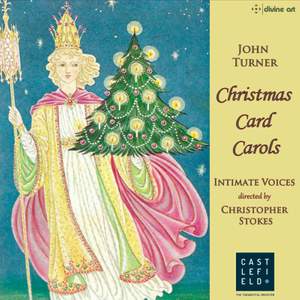 Turner, John: A Song on the Birth of Christ

Turner, John: I Sing of a Maiden

Turner, John: Away in a Manger

I Sing of a Maiden

Turner, John: The Garden of Jesus

For over twenty years, Britain’s foremost recorder player, John Turner, has composed a carol and sent the score as his Christmas Card. Until now just a personal gift to his friends, John was persuaded to record a selection, which has led to this beautiful album.

Presented by the chamber choir Intimate Voices and featuring sopranos Sasha Johnson Manning, Eleanor Gregory and Philippa Hyde in solo and duet pieces, with obbligato harp and oboe in some, this is a lovely mixed program of Nativity carols, composed very much in traditional style, in new settings of ancient texts.

John Turner is a fine composer but is chiefly known as a recorder player and champion of contemporary composers, with dozens of recordings to his credit, many from Divine Art and Métier.