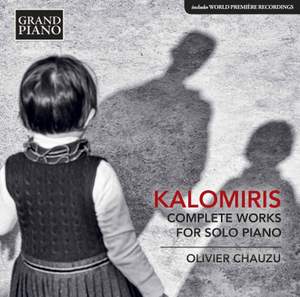 Kalomiris: Ballade No. 1 in E minor

Kalomiris: Ballade No. 2 in A-Flat Major

Kalomiris: Ballade No. 3 in E-Flat Minor

Ya ta hellinopoula (For Greek Children), Vol. 1: I. Moderato

Ya ta hellinopoula (For Greek Children), Vol. 2: I. Andantino - Più mosso - Tempo I

Manolis Kalomiris is seen as the father of modern Greek music, his ideals shaped from the start by a desire to create a Greek national school, and his devotion to education reflected in the superbly crafted volumes For Greek Children written throughout his life. This is the first and only release of his complete solo piano music on CD. On Naxos there are two orchestral albums of works by Kalomiris in its Greek Classics series, the Third Symphony [8557970] described as 'beautiful and powerfully gripping' by MusicWeb International, and another programme including orchestrations of the two piano Rhapsodies [8572451].