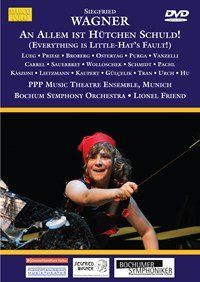 An allem ist Hutchen Schuld! is a fairy-tale opera set to the composer’s own libretto which is fashioned into a fantasia collage of more than 40 fairy tales, many taken from stories by the Brothers Grimm. This is the world premiere recording of the complete opera and joins several other Siegfrired Wagner operas in the Marco Polo catalogue, including Der Schmied von Marienburg and Der Bärenhäuter, Der Kobold, and Schwarzschwanenreich. The pianopianissimo-musiktheater was founded in 1980 by Peter P. Pachl due to the inspiration of August Everding, General-Intendant in Munich. Biennial celebrations in Pegnitz, Franconia, brought to life previously unperformed works by Richard Wagner. This opera ensemble has performed world premières of works by Franz Schreker, Siegfried Wagner and Alexander Zemlinsky and contemporary composers such as Judith Weir and writers such as Herbert Rosendorfer and Bernd Schünemann.