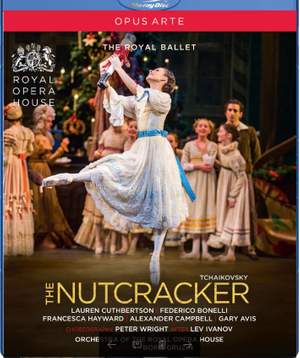 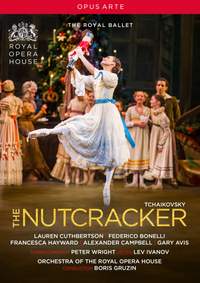 The Royal Ballet’s The Nutcracker is the quintessential Christmas ballet. When her nutcracker toy comes to life, young Clara is transported by the magician Drosselmeyer to a magical world of excitement and delight. Lauren Cuthbertson and Federico Bonelli dance the exquisite Sugar Plum Fairy and her Prince; Francesca Hayward and Alexander Campbell take the roles of Clara and the Nutcracker; and Gary Avis is the mysterious, kindly Drosselmeyer. This performance celebrated Peter Wright’s 90th birthday and a production that has been in The Royal Ballet’s repertory for more than thirty years. With sumptuous period designs, spellbinding stage effects and of course Tchaikovsky’s iconic score, The Nutcracker continues to enchant audiences of all ages. Filmed in High Definition and recorded in true surround sound. "fresh and reinvigorated - Nutcrackers come and Nutcrackers go but the Royal Ballet's version is a hardy perennial. " (The Stage) "The Royal Ballet’s production of The Nutcracker, always handsomely traditional, has become a tradition of its own." (The Independent) "Francesca Hayward and Alexander Campbell make an enchanting couple, " (The Daily Telegraph)