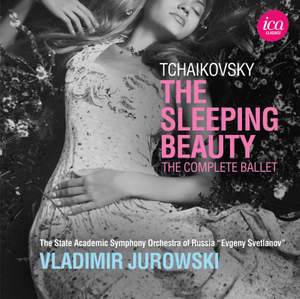 Prologue "The Christening": No. 1a, Introduction

Prologue "The Christening": No. 2b, Scène dansante

Prologue "The Christening": No. 3b, Pas de six. Candide

Act I "The Spell": No. 5, Introduction et Scène des tricoteuses

Act I "The Spell": No. 6, Grande valse villageoise

ICA Classics is proud to present Vladimir Jurowski’s recording of Tchaikovsky’s The Sleeping Beauty. It was recorded live in December 2013 with the ‘Svetlanov’ orchestra.

Jurowski has already accumulated a large catalogue of recordings all of which have received great critical acclaim. He is a proven seller.

Jurowski’s interpretation is based on his view that Acts 1 & 2 inhabit a Romantic sound world and then between Act 2 & 3, the sound changes completely becoming drier with much sharper outlines. He has said that if it were not for Tchaikovsky’s untimely death, he would have developed a similar style of composition to Stravinsky between 1917 and 1928, around the time of Pulcinella.

Presented in a 2CD brilliant box, with notes by David Nice and an interview with Jurowski about his interpretation. Mid price in excellent DDD sound with the authentic ‘Russian’ feel for ballet. Jurowski is Principal Conductor of the LPO and will also become Chief Conductor and Artistic Director of RSO Berlin which he will take up in 2017/2018. He has been Music Director of Glyndebourne (2001-13) and is also Principal Artist of the Orchestra of the Age of Enlightenment and Artistic Director of the Russian State Academic Symphony Orchestra of Russia ‘Evegeny Svetlanov’ heard here on this recording.

The State Academic Symphony Orchestra of Russia ‘Evegeny Svetlanov’ is one of Russia’s oldest orchestras dating back to 1936. Over the past 80 years, it has been directed amongst others by Gauk, Rakhlin, Ivanov and the great Evegeny Svetlanov. In 1972, it was granted the honoury title ‘academic’ for its exceptional creative achievements and in 2006 The State Academy Symphony Orchestra was officially named after Svetlanov. Jurowski was appointed Artistic Director in 2011. Its discography under the late Evegeny Svetlanov is wide ranging and large.

Jurowski’s characteristically no-nonsense and sometimes rather brisk approach informs this account by the Moscow-based State Academic Symphony Orchestra of Russia…Throughout, the playing is crisp with tight ensemble.