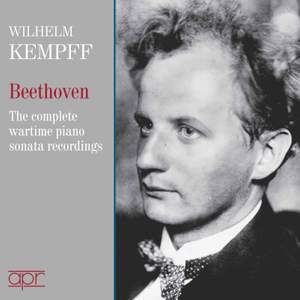 The original recordings are sonically well balanced and give a good measure of Kempff’s sonority. While the rare shellac pressings are admittedly of poor quality, any extreme noise reduction... — Gramophone Magazine, November 2017 More…

This important set contains the sixteen Beethoven sonatas that Wilhelm Kempff recorded for Grammophon in Germany between 1940 and 1943. Several are reissued here for the first time since their original release on 78rpm discs and none are currently available elsewhere. The sound is excellent for the period and all reveal the young Kempff at his best, in performances that compliment his later thoughts. The release is the companion of two previous APR releases of early Kempff Beethoven recordings the late sonatas (APR6018) and piano concertos 1, 3, 4 & 5 (APR6019), both of which received excellent reviews and were amongst APRs best sellers.

The original recordings are sonically well balanced and give a good measure of Kempff’s sonority. While the rare shellac pressings are admittedly of poor quality, any extreme noise reduction on transfer agent Mark Obert-Thorn’s part would have compromised their frequency range and timbral virtues.

This is wonderful Beethoven, lovingly presented, and a salutary reminder of why the interpretations of yesteryear matter so much today. Contrasting Kempff with the more pronounced longer-range vision of Schnabel is a fascinating exercise, and reminds us that multiple viewpoints on this great music can yield equally fascinating results. A mandatory purchase for all piano lovers and students.