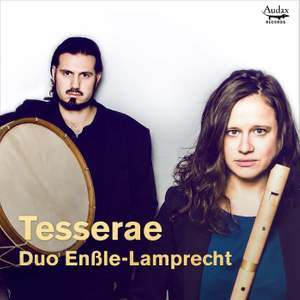 Duo Enßle-Lamprecht presents a mosaic of profane and sacred music of the medieval and with their virtuosic playing makes them an experience for today's audience. Exciting sounds and an astonishing richness of tone colours open up a different world. An Audax premiere!

Virtuoso, unconventional, and full of the joy of playing – this is how Anne-Suse Enßle (recorder) and Philipp Lamprecht (percussion) present themselves to their audience. With a seemingly inexhaustible instrumentarium made up of diverse flutes and percussion instruments, they forge a bridge between the end points of our listening habits, between the music of the Middle Ages and new and experimental music. This connection has numerous inspiring points of contact that spur on the ensemble’s creativity time and again, and leaves behind an enthusiastic audience.

In its interpretations of medieval music, the duo explores the distinctive features of the early flute and percussion instruments. AnneSuse Enßle and Philipp Lamprecht delve into the secular as well as the sacred music of the Middle Ages, employing instruments such as tabor, tamburello, nakers, Romanic bronze bells, medieval castanets, and various flutes. Since 2014 the duo has additionally occupied itself with a large-scale special project involving the complete works of the “Monk of Salzburg” (14th century), which will be performed over several years in the Salzburg area and enhanced by contemporary artists.

The special attraction of the duo, which was founded in 2008 in Salzburg, lies in its uncommon formation as well as in the resulting unusual concert programmes, which feature music from off the beaten track of the known repertoire. The musicians are continually commissioning new works and collaborating with composers and other artists.