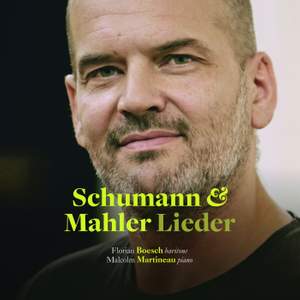 Boesch’s flexible and rich-grained baritone blends with the colourful support of Malcolm Martineau at the piano to offer splendidly characterised accounts of the Schumann…It’s in the Mahler,... — BBC Music Magazine, January 2018, 5 out of 5 stars More…

This recording brings together Florian Boesch, one of today’s foremost Lieder interpreters, and Malcolm Martineau, who is widely recognised as one of the leading accompanists of his generation.

With a partnership honed over many concerts and several recordings together, including a GRAMMY-nominated Die schöne Müllerin, the pair turn their attention to two of the greatest song cycles of the nineteenth century.

The recording opens with Schumann’s Op. 39, Liederkreis, settings of Joseph von Eichedorff’s poems, and finishes with Mahler’s Lieder eines fahrenden Gesellen, written around forty years later. The songs selected all tell, in varying hues, of the Romantic individual’s sense of alienation from others and of transcendence, or the longing for it.

An expressive and accomplished storyteller Boesch’s perceptive phrasing and exquisite range of colours is well matched by Martineau’s virtuosic and perfectly synchronized accompaniment.

Boesch’s flexible and rich-grained baritone blends with the colourful support of Malcolm Martineau at the piano to offer splendidly characterised accounts of the Schumann…It’s in the Mahler, though, that Boesch and Martineau reach new heights…The emotional impact is devastating.

The two partners are comfortable enough with each other that Martineau can perform almost like a soloist while Boesch keeps up with every gesture of phrase-shaping. They turn the agonized song “Ich hab’ ein glühend Messer” into a tragedy in miniature with great effectiveness. I doubt I’ve ever heard a better account of this cycle in its version with piano in place of the ubiquitous orchestration.

A performance that momentarily convinces you the piano-accompanied version [of Lieder eines fahrenden Gesellen] is preferable to the better-known orchestral version, with much credit going to Malcolm Martineau who generally displays more temperament than the baritone…The profound sense of leave-taking in the final Wayfarer song draws some of the most coloristically subtle singing I’ve yet heard from Boesch.

Florian Boesch sings with his usual subtlety. At times I wish he was less “expressive” and would let the song sing itself...He’s splendid in the Goethe songs, and in the Mahler, where I don’t miss the orchestra, so vivid is Malcolm Martineau’s playing.