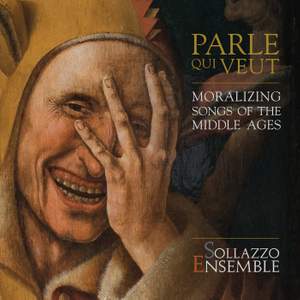 Moralizing songs of the Middle Ages

In this ingeniously assembled collection they delight us with songs of defiance and gentle rebuke directed against the gossips and naysayers of 14th and 15th century society. The result is a... — BBC Music Magazine, February 2018, 5 out of 5 stars More…

On Parle qui veut the performers embrace the exuberant style of flourishing melodies which was fashionable in the north of Italy in the fourteenth century.

In contrast, a different kind of expressivity is required for the sober and succinct aesthetic of the works with French provenance.

Sollazzo creates a pure, bright sound, enhanced by the songs’ incredibly open textures and the use of the rarely heard Pythagorean temperament.

All in all, this represents a remarkable debut.

In this ingeniously assembled collection they delight us with songs of defiance and gentle rebuke directed against the gossips and naysayers of 14th and 15th century society. The result is a magical sound-carpet of music…The fluid ‘conversational’ style of these accomplished musicians (they perform some of these pieces without the music) enables them to provide especially realistic and vivid projections of the texts.

This has to be one of the most exciting and engaging releases of medieval song in recent years...The singers use a variety of techniques to engage and communicate, from beautiful clear phrasing to crisp, expressive consonants...Every performance on this disc is illuminating, considered and committed.

Most of these late-medieval French and Italian songs rail against the practice of slandering lovers, though one beautiful work by Francesco Landini deplores the abuse of music...The Sollazzo Ensemble brilliantly express text and flavour.

a landmark: a wholly original approach to the secular music of the 14th century, done with energy and flair. The high voices decorate the polyphonic lines with almost whooping abandon; intonation is incisively pure and rhythms are buoyant...this is a hugely enjoyable and accomplished performance.