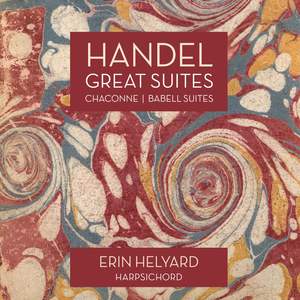 Babell: Suits of the most Celebrated Lessons - Suite No. 1 "Rinaldo"

Babell: Suits of the most Celebrated Lessons - Suite No. 1 in F Major "Rinaldo"

Babell: Suits of the most Celebrated Lessons - Suite No. 1 "Rinaldo"

Babell: Suits of the most Celebrated Lessons - Suite No. 4 in G Major "Rinaldo"

Acclaimed as “Australia’s most engaging soloist” by Limelight Magazine, Helyard is a virtuosic and expressive performer as well as a dedicated scholar of historically informed performance practice. This album was recorded shortly before Helyard was awarded the 2017 Helpmann Award for Best Music Direction, for Handel’s opera Saul, the latest in a long line of accolades for his work.

Whilst Handel is celebrated mostly for his oratorios and operas (such as Saul), in his lifetime he was also known as a brilliant harpsichordist. His music for the instrument – surprisingly little of which survives – is full of virtuosity, dynamism, and supreme lyrical colour.

The Great Suites, as they have become known, were first published in 1720 when Handel was 35. Written over the preceding few years, they are remarkable for their eclectic and wide-ranging idioms: French-style overtures, Italian sonatas and arias, and the dance elements of the Franco-German keyboard suite. As Helyard puts it, “the suites give us the impression of a performer and composer who was highly sophisticated, well-travelled, open-minded, and cosmopolitan.“

The Chaconne which opens the disc is an example of a genre beloved of both music-masters and amateurs. The repetitive form allowed both technical and expressive skills to be showed off: Helyard plays from a 1730s score with handwritten ornamentation that demonstrates how musicians at the time would have risen to the challenge. The album closes with a set of variations on Handel’s opera arias by William Babell, a violinist and harpsichordist in George I’s private band. “Inventive, difficult, showy, and glittering, they are entirely reflective of the grandeur of opera under Handel at its most splendid.“

Helyard plays a harpsichord made by Jacob and Abraham Kirckman in London in 1773, one of very few instruments from the time that have survived unaltered from their original state. This harpsichord is particularly remarkable for its ‘machine stop’, allowing the player to produce diminuendo and crescendo effects without lifting his hands from the keys.