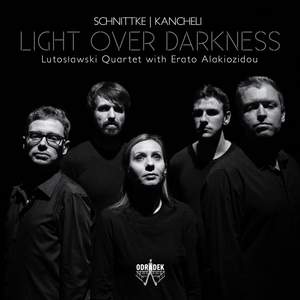 [Alakiozidou] captures perfectly [the Quintet’s] feeling of vulnerability with her beautifully veiled control of timbre and intelligent manipulation of silence…[in the Piano Quartet after Mahler]... — BBC Music Magazine, April 2018, 4 out of 5 stars More…

Schnittke: Piano Quartet in A Minor (After Mahler)

Greek pianist Erato Alakiozidou and the Lutoslawski Quartet perform works by Alfred Schnittke and Giya Kancheli, which combine the contemporary expressive vocabulary of postmodernism, with the historical narrative of the last three centuries of Western Music. Moments of amazing tension are juxtaposed with passages of fragile introspection.

The music of Alfred Schnittke (1934-1998) and Giya Kancheli (b.1935) was shaped by the history of the Soviet Union and the politics of Moscow. Both grew up in Stalin's era, yet neither composer was Russian - Kancheli is Georgian and Schnittke had a German mother and German-speaking Jewish father. Both Kancheli and Schnittke have highly distinctive styles; apart from the deep personal feelings they express in various ways, they conserve silence as a key colour in their musical canvases.

Schnittke's Piano Quartet (1988) was composed out of Mahler's sketch for the unfinished second movement of his student Piano Quartet written in the mid 1870s. While Schnittke sometimes clearly departs from the Mahler original, much of the time it is quite clearly present, often with additional material accumulating round it - chromatic chords, dense canonic treatments - to give the effect of seeing an object through obscure glass or hearing music under water.

If Schnittke's music is often in uneasy dialogue with that of the Austro-German tradition, the work of Giya Kancheli seems set apart from that tradition, linked rather with Pärt and Górecki. Like Schnittke's Piano Quintet, Kancheli's In L'istesso Tempo has a mournful tone, but while Schnittke expresses a personal grief, Kancheli's is more universal. In a preface to the score Kancheli tells the listener to expect "threads of sorrow caused by the imperfections of the world".

Erato Alakiozidou has performed internationally in countries including Italy, Serbia, Turkey, Poland and the UK. She has pioneered a number of projects including international music festival Synthermia, contemporary music ensemble Idée Fixe, non-profit organisation Beartive, and the Tangos a cuatro Quartet.

Named after the great 20th-century Polish composer Witold Lutoslawski, and specialising in music of the 20th and 21st centuries, the Lutoslawski Quartet is one of Poland's leading quartets. Since its formation in 2007, the group has quickly established itself on the Polish and international classical music scene, appearing in numerous prestigious festivals and concert halls, as well as working with IRCAM at the Centre Pompidou in Paris.

[Alakiozidou] captures perfectly [the Quintet’s] feeling of vulnerability with her beautifully veiled control of timbre and intelligent manipulation of silence…[in the Piano Quartet after Mahler] the performers deliver an intense and strongly characterised interpretation, and they are equally adept at steering us through the sorrowful processional of halting ideas that make up Giya Kancheli’s Piano Quartet.

The sheer intensity of this chamber version [of In Memoriam] is utterly gripping, and the combination of the young Greek pianist Erato Alakiozidou and the Lutosławski Quartet is electrifying. They treat the music with reverence, certainly, but they are also not afraid to mould it, to take it and make its very personal pain their own...This is a recording of extraordinary quality.