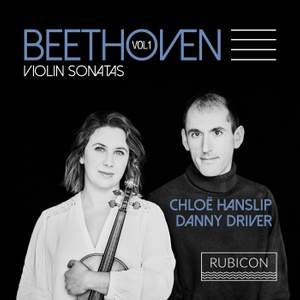 Chloë Hanslip and Danny Driver make an exceptionally good duo. The sense of intimate responsiveness to each other runs through all four sonatas…Everything sounds as though it’s minutely calculated... — BBC Music Magazine, March 2018, 3 out of 5 stars More…

Chloë Hanslip and Danny Driver are approaching the culmination of a complete Beethoven Violin Sonata cycle where each concert is both broadcast live by the BBC on Radio 3, and recorded by Andrew Keener and Phil Rowlands for Rubicon. Beethoven’s ten violin sonatas represent the supreme challenge for a violin and piano duo, and the drama, visceral excitement and many intimate moments of these masterpieces is superbly captured in these live performances.

Chloë and Danny’s traversal of the ten sonatas concludes on 17 October, with Nos 9 ‘Kreutzer’ and 10, and both the BBC and Rubicon will be there to capture the moment. The Rubicon series will comprise three volumes to be released over the next year.

Chloë Hanslip has established herself as an artist of distinction on the international stage, performing in many of the world’s great venues with some of the greatest orchestras in the world, under conductors such as Sir Neville Marriner, Sir Andrew Davis, Mariss Jansons, Paavo Järvi, Charles Dutoit, Michail Jurowski and Jeffrey Tate. She has recorded for Warner Classics and Hyperion and won an ECHO Klassik Award for Best Newcomer in 2003, and a Classical Brit in 2003 for best Young British Classical Performer. Her wide- ranging repertoire includes concertos by Schoeck, Adams, Brett Dean and Vieuxtemps, and sonatas by Bowen and Medtner.

The international acclaim that Danny Driver’s recordings and performances have generated over recent years has cemented his reputation as one of Britain’s most respected and versatile pianists. He has earned three Gramophone Award nominations, a National Public Radio Top 10 Award and Limelight Magazine’s Instrumental Recording of the Year 2014 Award for his recording of Handel’s Eight Great Suites.

Recitals feature prominently in his career: he has appeared regularly at the Wigmore Hall and in venues across Europe, Asia and North America, playing repertoire from Bach to Adès. His 2016-17 schedule included the Southbank’s International Piano Series, Music Toronto, the Salle Bourgie (Montreal), the Musée de l’Orangerie (Paris), and performances of Ligeti’s Piano Études across the USA and Japan. He returns to the Wigmore for a solo recital next March, broadcast on Radio 3.

As a chamber musician, Danny has appeared at the Australian Chamber Music Festival, Bard Music Festival and Stockholm’s Festival O/Modernt. He collaborates regularly with violinist Chloë Hanslip, including this their complete Beethoven Violin Sonatas (performed at Turner Sims Hall), and Wigmore Hall concerts together in coming seasons.

He has played concertos with orchestras all over the world including the OAE, BBC Scottish Symphony Orchestra, Minnesota Orchestra and Bournemouth Symphony Orchestra, as well as appearances at the BBC Proms, most recently with the Royal Philharmonic Orchestra under Charles Dutoit. This season his RPO relationship continues with performances of Beethoven’s Concerto no.4.

Chloë Hanslip and Danny Driver make an exceptionally good duo. The sense of intimate responsiveness to each other runs through all four sonatas…Everything sounds as though it’s minutely calculated in response to, and anticipation of, what the other player is doing…All I miss is the sense of fire in the blood, that the playfulness and wit have a dangerous edge.

a superb collaborative relationship. What also struck me was the freshness and spontaneity of their approach.