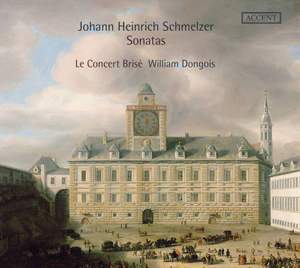 Schmelzer: Sonata a due

The cornetto player William Dongois and his ensemble, Le Concert Brisé, already have an extensive and succesful discography on Accent (with their Bertali, Scheidemann or Buxtehude recordings in the mind of plenty of early music lovers).

The music contained in this album, a selection of Sonatas by the Austrian early Baroque composer Johann Heinrich Schmelzer, bears many influences: from the noble sacred to the almost popular, with lots of references to the educated secular and the opera. Through the inclusion of passages in the form of toccatas, chaconnes and passacaglias, we are even introduced to the world of improvisation at court.