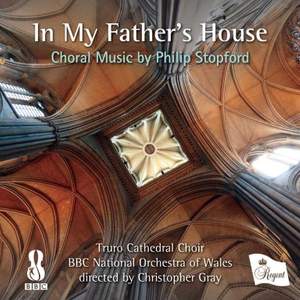 In My Father’s House

Stopford: In my Father’s house

Stopford: Christ is our cornerstone

Stopford: Jesu, lover of my soul

Stopford: There is no rose

Stopford: A Child is Born in Bethlehem

Stopford: The star of kings

Following the world-wide success of Truro Cathedral’s previous recording of Philip Stopford’s music “Do not be Afraid” (REGCD400) we are delighted to announce the release of a second recording. This is an album of moving and uplifting anthems, motets and music for Christmas from an immensely popular and talented composer, performed by Truro Cathedral Choir, with luxurious orchestral accompaniment provided by the BBC National Orchestra of Wales, directed by Christopher Gray.

In the last few years Philip Stopford has emerged from among the younger generation of British composers as one of the most popular and prolific writers of new choral music, and is in wide demand on both sides of the Atlantic.

His beautifully-crafted music combines uplifting classic texts with memorable, radiant melodies, and glorious harmonies. This latest recording adds another dimension with wonderfully-colourful and expertly-scored orchestral accompaniments. Truro Cathedral Choir has an unbroken tradition dating back to the 1880s. Today, the choir usually performs with its twelve adult professional singers, joined by either its 18 boy Choristers or its 19 girl Choristers.