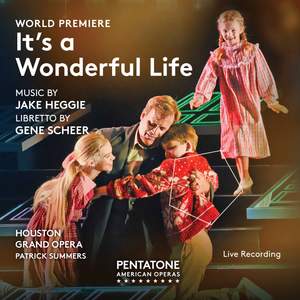 Act I: Clara in the Heavens (Live)

Act I: Wait and Save (Live)

Act I: A Rainbow at Midnight (Live)

Act II: I Want to Hire You, George (Live)

Act II: You're Worth More Dead Than Alive (Live)

Act II: I Wish I'd Never Been Born (Live)

Interview,  Jake Heggie on It's A Wonderful Life

The American composer talks to Katherine about his opera based on Frank Capra's classic 1946 film, released on Pentatone at the end of last year.

Composer Jake Heggie and librettist Gene Scheer knew before they ever wrote a note or a line of It’s a Wonderful Life that there are challenges in adapting a treasured classic for the operatic stage. After all, Heggie and Scheer’s hit 2010 opera Moby-Dick raised the same challenges: how could they remain faithful to the source material and still create something new, which emphasized the story’s innate operatic qualities?

For It’s a Wonderful Life, Heggie and Scheer responded by keeping the basic plot and characters from the beloved Frank Capra film version but changing the perspective. But in a departure from the film, all the action takes place from Clara’s perspective and in her realm. Seventy mirrored doors represent portals in time and space, which Clara uses to piece together the events of George’s life in an effort to understand what has brought him to this moment of despair.

Critics said the “feel good” work (Opera Warhorses) “dispels any notion that you may have about expecting the opera to duplicate the film [and has a] crazy-quilt score that may be Heggie’s most delightful concoction” (Theater Jones). As the Houston Chronicle critic summed up, “George Bailey would be proud.”

Heggie’s eclectic tonal music is light on lyrical flights and rhythmically overly rigid, but the accomplished orchestral writing satisfyingly conjures up appropriate moos of ardour and longing. William Burden’s lively tenor brings new life to a hero long associated with James Stewart’s drawl…Not a great opera, maybe, but a useful one to have on hand in these dark, divisive times.

[Heggie and Scheer] are a perfect fit, and the wonder is that they have caught so faithfully the deep and abiding spirit and American tinta of this small-town allegory…Scheer is such an accomplished librettist in his understanding of how words and music collide in the theatre…[Heggie] is a born melodist, purveyor of the most grateful, ‘singable’ vocal lines and a word-setter of real eloquence…Not a dry eye in the house.