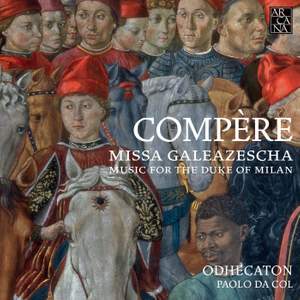 Music for the Duke of Milan

This is only the third anthology devoted to Loyset Compère, whose 500th death-anniversary falls next year; but it is a fitting commemoration, for both music and performance are on a pleasingly... — Gramophone Magazine, November 2017 More…

During the reign of Duke Galeazzo Maria Sforza (1444-76), Milan experienced an extraordinary musical era. In the 1470s, the Duke set out to form a ‘famous and worthy choir’, recruiting a ‘goodly number of singers from beyond the Alps and from various countries’. He soon assembled a musical ensemble that boasted some of the most celebrated musicians in the Franco-Flemish polyphony of the day, from Italy and beyond.

The Duke brought into being a new kind of polyphonic mass, a cycle of motets called missales to replace the traditional ordinarium, with texts attributing special importance to the worship of Our Lady of Grace and Mercy, much beloved by the Sforza family.

A masterpiece of the genre is the so-called Missa Galeazescha for five voices, composed by Loyset Compère and performed here by an ensemble inspired by the impressive size of Galeazzo Maria Sforza’s cappella. This recording brings together four vocal instrumental groups.

This is only the third anthology devoted to Loyset Compère, whose 500th death-anniversary falls next year; but it is a fitting commemoration, for both music and performance are on a pleasingly high level...the groups are so well blended (and indeed opulent) that one imagines that Galeazzo would have been delighted. In fact, the variety of approaches on offer is one of this disc’s most attractive aspects.