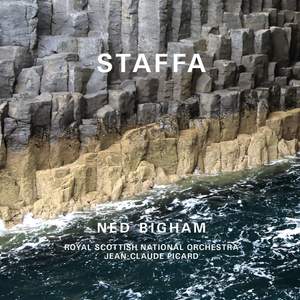 The composer shares his thoughts on his new album of orchestral works, inspired by four very different islands.

Staffa is the much anticipated collection of new orchestral works by acclaimed composer Ned Bigham. Building on the success of his first album of orchestral works Culebra, which reached no. 11 in the Specialist Classical Charts in 2014, Staffa looks set to solidify Bigham’s reputation as an artist whose tuneful music is accessible to a wide audience whilst having real compositional depth.

The title piece, for orchestra and three large screens, was created in collaboration with BAFTA and Grierson award-winning visual artist Gerry Fox, and will be premiered by the BBC Scottish Symphony Orchestra, conducted by Martyn Brabbins, at the 70th Anniversary Celebration Concert of the Edinburgh International Festival.

Scored for full symphony orchestra, celeste and two harps, Staffa dramatically evokes the fleeting moods of the Inner Hebridean island’s elemental location, with the marriage between sound and image unique and magical. Gerry Fox’s visuals pay homage to Mendelssohn's famous 1829 visit to its haunting Fingal's Cave by exploring the unique hexagonal, basalt column formations of the interior and its surroundings.

Whilst inspired by Mendelssohn’s journey, Ned’s music is new and ground-breaking.

The other works on the disc complement Staffa (in its stereo version) and demonstrate Bigham’s playful way with existing forms. The two sets of Archipelago Dance Suites whisk the listener off to Bigham’s imagined islands in these vivid orchestral tone poems. Halmahera is scored for two pianos and orchestra, with the canonic piano parts delightfully performed by Lynda Cochrane and Judith Keaney. The irresistable Tegua takes the polka form as its starting point. The nocturnes are mysterious and haunting, with the glorious harp writing in Serenade performed by Pippa Tunnell.