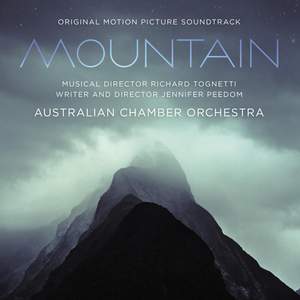 The music soundtrack to the Australian Chamber Orchestra's critically acclaimed collaboration with director Jennifer Peedom.   Three years ago, the Australian Chamber Orchestra's Artistic Director Richard Tognetti approached BAFTA-nominated director Jennifer Peedom (Sherpa) with a vision for an expressive interweaving of music and film. The result of this collaboration is Mountain: a cinematic and musical odyssey that explores the troubled and triumphant history of our timeless fascination with mountains.   Premiered in concert in the Sydney Opera House Concert Hall as part of Sydney's Vivid LIVE 2017, Mountain draws the listener in to a world in which majesty and terror collide, thousands of metres above and beyond the familiar, comfortable landscape of the everyday.   Richard Tognetti worked closely with Peedom to curate a stunning soundscape that mirrors the serenity, magnitude and terror of the landscapes featured in the film. Works by Chopin, Vivaldi, and Beethoven are featured, as well as original music by Tognetti himself.   "The original music I wrote for Mountain was composed in real collaboration with Jennifer [Peedom]," Tognetti said. "She would tell me what she was trying to express and what the scene in the movie meant, and then I would try and come up with the musical equivalent. Some of the compositions are filmic and some of them are more like dreamscapes."   Critical Acclaim for Mountain "The ACO scales the heights." - Limelight Magazine "...a sublime rush of adrenaline and orchestral beauty" - The Guardian