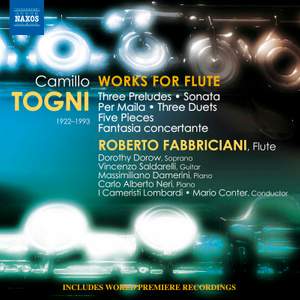 3 Preludes for Flute: No. 1, Rondine garrula

3 Preludes for Flute: No. 2, Intreccio

3 Preludes for Flute: No. 3, Compianto

Camillo Togni stands as one of the most representative figures of 20th-century Italian music. His uncompromisingly independent creativity can be defined as the quest to strike a balance between exacting formal coherence and the broadest imaginative freedom, while composing with extraordinary craftsmanship. Togni was inspired to write numerous works for his friend the acclaimed flautist Roberto Fabbriciani, a musician as close as any to this composer’s complex, mysterious and deeply poetic musical language.