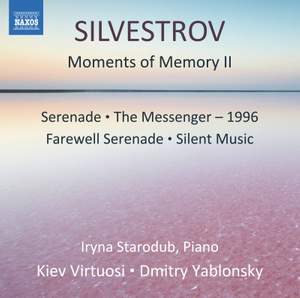 2 Dialogues with Postscript (Version for Piano & String Orchestra): No. 2, Postlude

Silent Music: I. Waltz of the Moment

Sylvestrov: The Messenger - 1996 (version for piano, strings and synthesizer)

Moments of Memory II: No. 1, Serenade of Childhood

Moments of Memory II: No. 2, Elegy

Moments of Memory II: No. 4, Postlude

Moments of Memory II: No. 6, Pastoral

Ukranian composer Valentin Silvestrov has said that ‘I do not write new music. My music is a response to and an echo of what already exists.’ This is particularly pertinent to works such as the Two Dialogues with Postscript that engage hauntingly with Schubert and Wagner, and the evocative Moments of Memory II which alludes to Chopin and yearns for an unreachable past. ‘Music is still song, even if one cannot literally sing it,’ says Silvestrov. Silvestrov was born on September 30, 1937 in Kiev. He began private music lessons at the age of 15. From 1955 to 1958 he studied music at evening school in Kiev while training to become a civil engineer. For the following six years he was enrolled at Kiev Conservatoire. Here he was a composition pupil of Boris Lyatoshinsky and also took harmony and counterpoint lessons with Levko Revutsky. His catalogue consists mainly of orchestral, chamber, vocal and piano pieces. These have been played internationally. Early works such as the Piano Quintet earned him a place among the leading avant-garde Ukrainian composers of his generation.