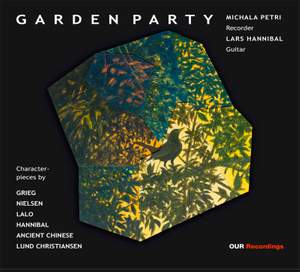 Garden Party: I. The Blackbird

Garden Party: IV. The Wagtail and the Cuckoo

Flowering Flowers at the River Ge

All good musical duos are conversations, and when Lars Hannibal and Michala Petri play together, they create an extraordinary, intimate space.

From their ﬁrst concert in the Monastery La Cartuja de la Sierra in Andalusia, Spain in the summer 1992, they have toured through out Europe, North and Central America and Asia, giving more than 1.500 co ncerts from a repertoire spanning from the late renaissance and early baroqu e, the classical and romantic periods, to contemporary music written e specially for them.

In celebration of their 25th Anniversary, Michala and Hannibal have selected a very special program of some of the pieces they hav e have played live so many times – to share that intimate “ﬂeeting moment” they have perfected in the live performances. Featuring musical sketche s and character pieces by Carl Nielsen, Edvard Grieg, Edouard Lalo, Asger L und-Christiansen, Lars Hannibal and a new arrangement of an ancient Chine se melody, “Garden Party” perfectly captures the spirit of “Conversation, Com panionship and Communication” that has deﬁned their quarter-century long musical partnership.

There’s often a faintly dreamy, gentle quality to this programme, even in its perkier moments…Combine that with the effortless symbiosis of these two veteran collaborators, and the fluidity and naturalness of Petri’s playing itself, and it’s all too easy simply not to register how virtuoso so much of this music is…It’s beautifully played.

The gusto, the treble dexterity and versatility of her playing on this disc — in signally satisfying sonic combination with guitar — expels thoughts of the trivial.

pure musical joy; light and breezily melodic. It’s the sort of music you want to listen to over and over again. And I did.