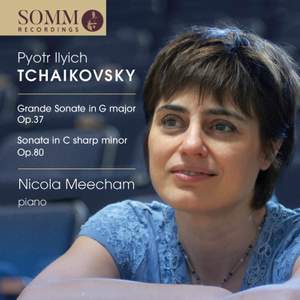 Superlative reviews greeted Nicola Meecham’s disc for SOMM, of works by Kodaly, Enescu and Janacek (SOMMCD 081). They now welcome her back in a fabulous recital of piano music by Tchaikovsky which includes the two rarely performed or recorded Piano Sonatas. The large-scale, majestic Grande Sonate in G major Op. 37, Tchaikovsky’s most significant work for solo piano, and the earlier Sonata in C sharp minor of 1865.

The G major sonata was published during Tchaikovsky’s lifetime, having been written in 1878. The work opens with a magnificent chordal gesture and an initial richly inventive theme, which is threaded through and across all four movements. In both sonatas, Tchaikovsky is in total command of his chosen structure and develops his ideas with great originality and ease. The effective keyboard writing apparent in both works betokens a composer thoroughly at home in the medium.

The disc includes four of Tchaikovsky’s shorter solo pieces, the Nocturne and Feuillet d’album, Opus 19 and the Humoresque Op. 10 No. 2, all of which strengthened his reputation as a distinctive composer of solo piano pieces. The delightful Doumka in C minor paints a picture akin to a rustic Russian scene and is one of the finest of all of Tchaikovsky’s shorter solo piano works.