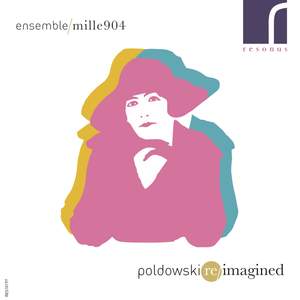 The quality of her music is such that her neglect seems positively strange. Outstanding creations among her Verlaine settings include a furious and impassioned setting of Spleen, and an unforgettable... — BBC Music Magazine, December 2017, 4 out of 5 stars More…

Largely neglected following her death, the music of Poldowski – alias of Iréne Régine Wieniawska – is brought back to life in this re-imagining by David Jackson, director of the Paris-based chamber group Ensemble 1904.

Featuring twenty-two settings of poems by the nineteenth-century French poet Paul Verlaine, the ensemble makes its recording debut with this alluring and compelling programme of song.

Poldowski’s complete Verlaine settings are united for the first time in vivid arrangements by David Jackson inspired by the composer herself, known to have made chamber versions of her own songs. Included is the world premiere of the recently rediscovered Nous Deux.

Released on CD and in digital formats ranging from MP3 up to 24-bit studio quality master with a full-colour booklet as a PDF.

The quality of her music is such that her neglect seems positively strange. Outstanding creations among her Verlaine settings include a furious and impassioned setting of Spleen, and an unforgettable version of L’heure exquise which could give Reynaldo Hahn a run for his money…the arrangements are salon-like, atmospheric and sympathetically performed, expanding the scaler of the music – which is great-hearted enough to take it.

Wieniawska has a real feel for Verlaine’s verse and frequently elves deep into its meaning. Her versions of poems from Fêtes galantes have an edgy, grotesque, even nightmarish quality, in contrast to the playful approach of many of her contemporaries…The performances are good, too. Jazmin Black-Grollemund sings with great warmth of tone and careful attention to text. Jackson’s playing is admirably clear and limpid.

[Verlaine's texts] exactly suited the floaty, Debussy-influenced harmonies, lush piano writing and undemonstrative lyrical lines favoured by Poldowski...All 22 of her Verlaine settings (including one, Nous deux, only recently rediscovered) are included on this recording, which features the appropriately husky timbre of the American soprano Jazmin Black Grollemund.